Taiyo Holdings is a chemical manufacturer that embraces the corporate philosophy of “Advancing our Group technology and providing innovative products to deliver hope to the world and support the realization of a fun and enjoyable society.” We are dedicated to manufacturing products that benefit society. We also sponsor and participate in local sports events, and provide support to local sports foundations and youth athletes. Through our community contribution activities and by contributing to society through sports, we strive for the realization of a fun and enjoyable society.

Nozomi Okuhara won the bronze medal at the 2016 Rio de Janeiro Olympic and Paralympic Games and in 2017 became the first Japanese woman ever to win the World Championships in women’s singles. Despite her small frame, Okuhara has made a large impact on the global stage. Nozomi Okuhara is an athlete who has constantly challenged herself at the highest levels and now, as a professional athlete, she looks to take on new challenges. Taiyo Holdings is a company that started from zero and now claims the world’s top share of the solder resist market, and we are challenging ourselves to evolve into a comprehensive chemical company. Our desire to serve as the Okuhara’s corporate sponsor is based on our recognition of a mutual commitment to challenge ourselves and striving for greater heights.

Taiyo Holdings will continue to support Nozomi Okuhara’s challenges and will continue contributing to the realization of a fun and enjoyable society.

While I feel the weight of this responsibility as a new professional in the world of badminton and as a representative of a new sponsor, there is no change in my mission. I strive simply to pour my all into fulfilling my goals. The race to the Olympics is about to begin. As I shift into full-scale preparation mode for the 2020 Tokyo Olympics, I want to improve my performance by creating a training environment that is ideal for me, one of the main reasons I chose to turn pro. 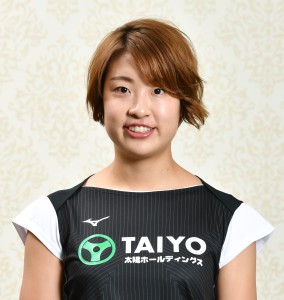