TAIYO HOLDINGS CO., LTD. (head office: Toshima, Tokyo; President and CEO: Eiji Sato; Securities Code: 4626, hereinafter “Taiyo Holdings”) is pleased to announce it has renewed its sponsorship deal with professional badminton athlete Nozomi Okuhara. With this renewal, the original endorsement deal signed with Okuhara in January 2019 is extended through to December 31, 2021. Under this endorsement deal, Okuhara will continue to represent Taiyo Holdings during her activities as a professional badminton athlete while also participating in marketing and promotional activities conducted by Taiyo Holdings. Although badminton competitions have seen cancelations and postponements due to COVID-19, Taiyo Holdings is committed to supporting Nozomi Okuhara’s athletic pursuits as our sponsored athlete.

Nozomi Okuhara won the bronze medal at the 2016 Rio de Janeiro Olympic and Paralympic Games and in 2017 became the first Japanese woman ever to win the World Championships in women’s singles. Despite her small frame, Okuhara has made a large impact on the global stage. Since turning pro in January 2019, Okuhara has marked an unparalleled start as a professional badminton athlete and secured the World No. 1 ranking for the first time in her career by October 2019. Okuhara continues to set her sights high as she takes the badminton world by storm.

Taiyo Holdings is a company that started from zero in 1953 and now claims the world’s top share of the solder resist market. Today, we continue our drive towards becoming a comprehensive chemical company. Taiyo Holdings embraces the corporate motto of work to realize a pleasant society by further advancing every technology within the Group and creating a wide range of products to help fulfill the dreams for the whole world with our innovative products. Under this philosophy, we remain dedicated to creating products that benefit the world.

Taiyo Holdings also proactively engages activities that contribute to social and local communities by sponsoring and participating in local sports events, and by sponsoring local sports organizations and young athletes. As part of this mission, we concluded a sponsorship deal with Nozomi Okuhara in January 2019.

Taiyo Holdings will continue to support the athletic pursuits of Nozomi Okuhara and make further contributions towards the realization of a fun and enjoyable society.

Comments from Nozomi Okuhara
I am honored to continue receiving the heartfelt and generous support of Taiyo Holdings following the postponement of the 2020 Tokyo Olympic and Paralympic Games. COVID-19 has created an uncertain future for society and for competitive sports. This makes me ever more grateful for the support provided by Taiyo Holdings. There is no change in our mutual aspiration to compete and succeed on the global stage and I will continue to pursue my goals while envisioning a bright future together with everyone at Taiyo Holdings. 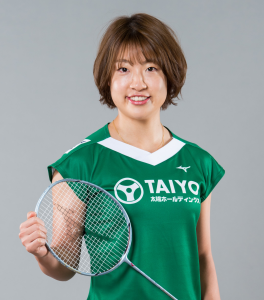